If anyone has a hamster never buy this!! It killed my hamster.

I woke up this morning and found him dead The wool was all stuck in his mouth i’m so angry they can sell this! I googled kapok wool on the Internet and it says

“Despite having short fibres, kapok still poses numerous health risks to hamsters, most importantly its lack of dissolution when accidentally ingested. The fibres in kapok do not readily dissolve, and therefore will cause dangerous blockages in hamsters. Each pod comes with it’s naturally occurring seeds (which can be pressed to make soap and vegetable oil) therefore hamsters have a reason to be putting bits of bedding in their mouth or eating it. This is something they wouldn’t normally have as neither wood bedding nor paper based bedding provides this incentive to consume the bedding

‘The fibres in kapok do not readily dissolve, and therefore will cause dangerous blockages in hamsters’

I’m so annoyed I thought it would be fine as it says its natural bedding and for hamster.

I am going to email the company and make a serious complaint.

Any type of cotton or kapok type bedding is not safe!

Another incidence of a hamster choking to death on Kapok bedding can be seen in the review section for the version of Rosewood Soft ‘n’ Safe sold by Wilko.  In this Shocking review the owner says:

“I brought this bedding a few weeks ago for my hamster who was only 8 months. Read previous reviews on this product and thought it was safe for my hamster to use. However it lead to my hamster choking and passing away I know this because my hamster was found with this bedding in his mouth blocking his airway. I didn’t think anything like this would happen as the bedding is claimed to be safe. I have done my research and found that multiple hamsters have died from bedding similar to this type. Please be more careful when purchasing.” 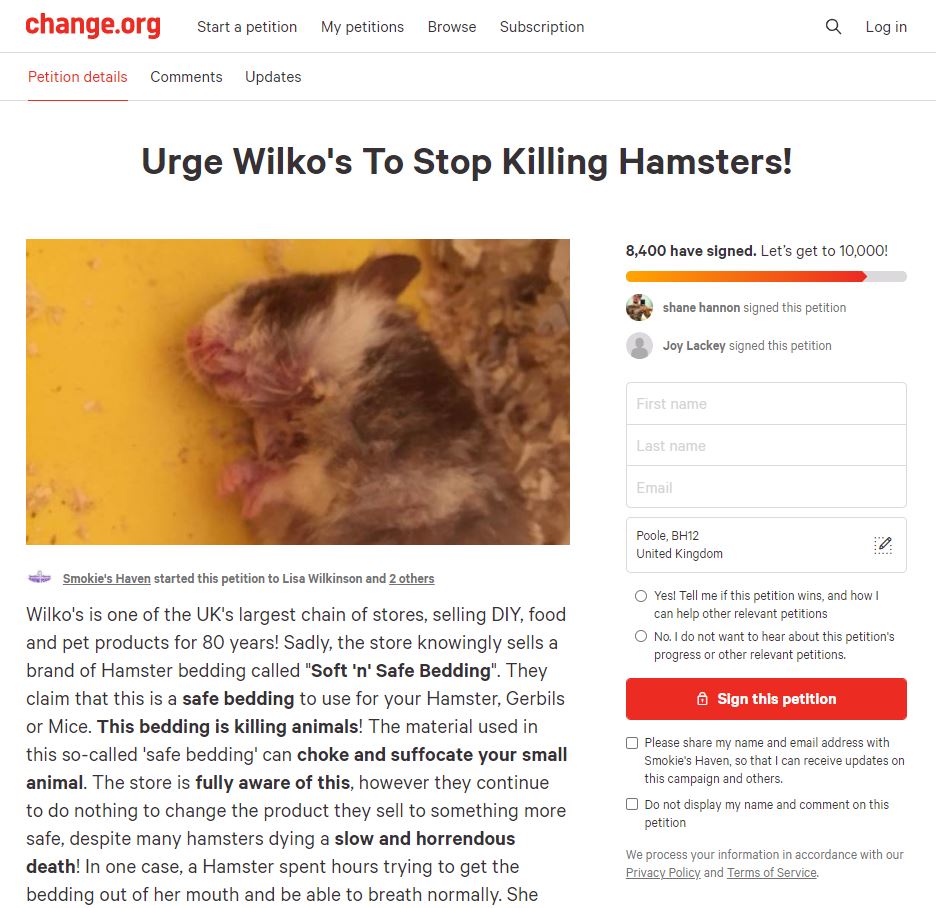 Along with the concerning reviews, Wilko also have a Change.org petition that is signed by over 8000 people, asking them to stop killing hamsters. The petition was started by another owner who found their hamster choking on Soft ‘n’ Safe, the story is also reported in the Hull Daily Mail –

“Mollie Coupland, 21, who lives in Cherry Burton, discovered Nymphadora the hamster suffocating on the bedding from Wilko early on Monday, January 8. Despite a two-hour battle to save her life, the hamster died.”

“Mollie said: After noticing that she was suffocating, we spent two hours trying to remove this bedding from her mouth and throat, but because it’s so fine we couldn’t get much out.”

“She had scratched her face to the point that it was bleeding in an attempt to get this out of her airways, and was making the most horrific noise while gasping in air.”

“Wilko has said it cannot explain why the hamster choked to death on the bedding.”

Animal Welfare Advice Against Fluffy Bedding is Being Ignored

There are numerous dangers to using fluffy bedding as can be seen in the list below. Important post mortem evidence exposing the ingestion issue, which is hidden to the naked eye has been reported on our fluffy bedding dangers page where you can see more evidence regarding Rosewood Soft n Safe.

Along with the risk of choking, the other dangers to using fluffy bedding are:

Blockages – The material cannot be digested properly and can cause what seems like constipation.

Respiratory issues – The material can enter the lungs and cause respiratory problems, which is incurable as antibiotics don’t remove the substance itself. It is a slow and painful death.

Pouch trapping– It can become lodged in the pouch potentially leading to infection.

Choking – There have been many reports of hamsters found dead with fluffy bedding stuck in their mouth blocking their airway.

Limb trapping – It can also be too harsh to pull apart for small creatures, and when they exit their nest to get food or water, their limbs can become trapped. And with their natural instinct, they pull on it until their limbs can get dislocated. Some people have even reported their pets gnawing their own limbs off to free themselves. 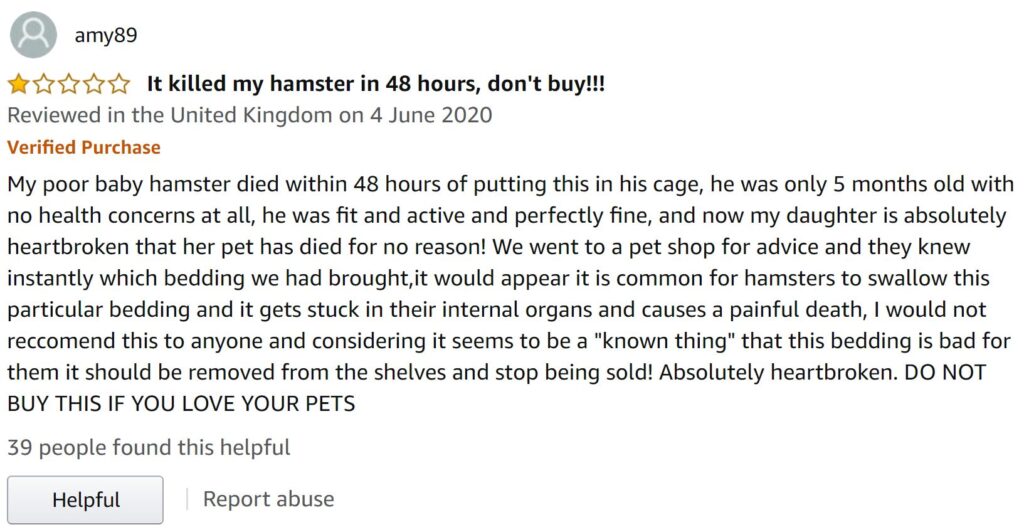 This is just one review taken from the many negative reviews on Amazon of customers either complaining that the product has directly killed their pet or from people that know about the animal welfare advice that exists. Amazon have now removed many fluffy bedding products, but it’s surprising that they continue to sell this product when there are so many alarming Soft n Safe reviews.