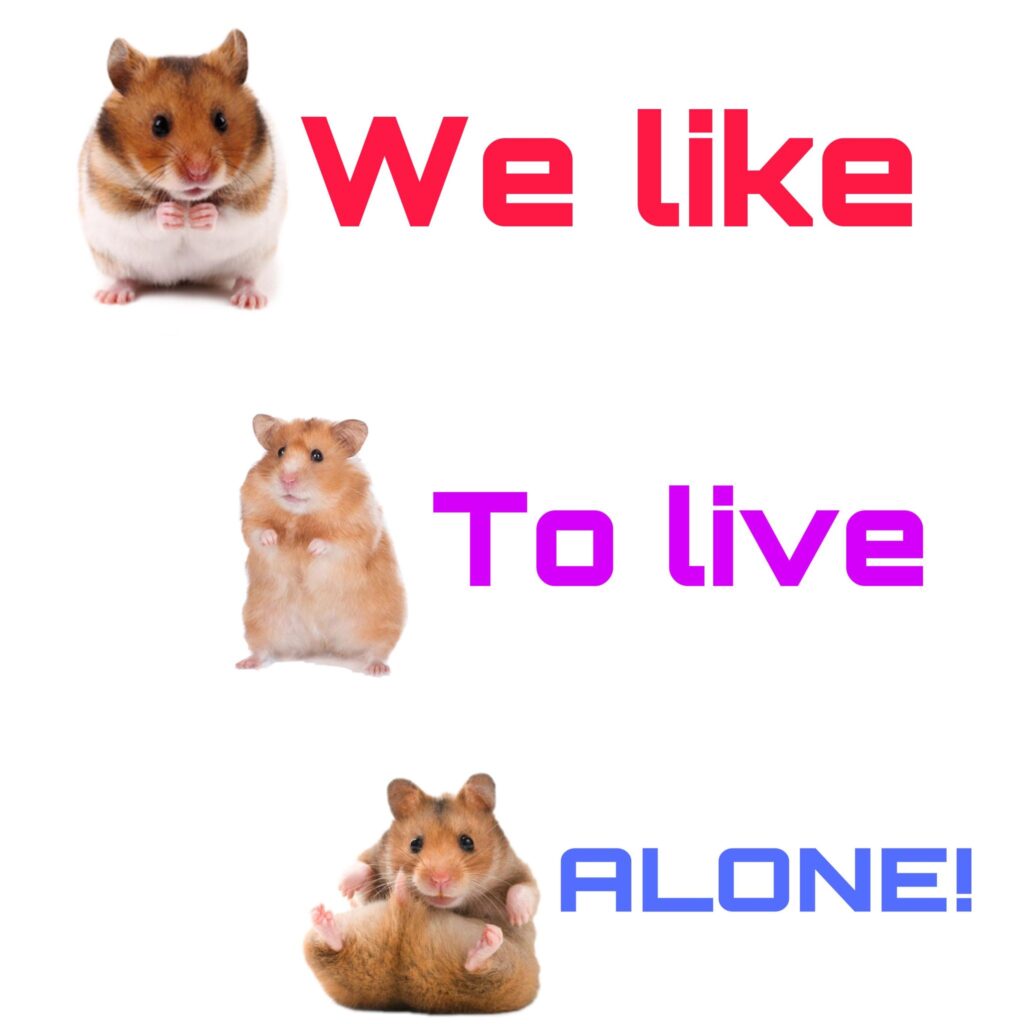 Can Hamsters Live Together?

No, not in a domestic enclosure. It is likely that fights can break out leading to serious injury or death.

Yes, they are solitary animals and it is their instinct to defend their territory. They prefer to live alone and don’t get lonely or depressed about being on their own.

Both of these hamster species will live alone in the wild. There will come a time where one hamster will encounter another hamster and will have to defend their territory by fighting; this can lead to serious injury or death. The other time the hamsters will meet each other is when it is the time to mate, the male hamster will mate with the female hamster, the female will chase off the male hamster and the male will then go off and find another mate, leaving the female to give birth and raise the pups. When the pups become the age of 8 weeks they will become territorial and the mother will then kick them out of the burrow so they can lead their own life in another territory.

Even though we have domesticated hamsters they are still very territorial and once out of the shop, ethical breeder or rescue. A hamster should never live in a pair / colony or with any other species.

The Reason Why Hamsters are Solitary

Domestic Dwarfs / Roborovski hamsters ideally should not cohabit when in the domestic territory. There has been a very high number of cases of fights breaking out that lead to serious injury or death. When we domesticated these species, we removed the need for reproduction and safety. Although a small number of experienced hamster owners have managed to have the same litter and sex of hamster, even these experienced owners can run into fights breaking out etc.

“This is why many places including hamsterwelfare.com will advise against pairs / colony’s of domestic hamsters. There are no benefits of them living together, they do not get depressed by living alone and the risks are not worth taking into consideration.”

“Hamsters should never be housed together. Although wild hamsters live in colonies, pet hamsters are not provided the endless space to be able to live with others. No matter how much space is provided or how many hours you can supervise, you cannot prepare for every unknown. We believe in taking preventative measures to ensure the safety of every hamster. We believe in advocating for safer methods of hamster keeping.”

Video of Two Dwarfs Fighting. This is Very Dangerous

Ivy was Bullied by Willow

In this story, Ivy was bullied and attacked by Willow and has been left with scab wounds that are now healing on her back. It’s shocking to hear that these two Syrian hamsters were sold together with the same tiny cage at Pet Smart, who in their own care guide state that hamsters are solitary animals. It is said that Ivy used to always be in the top corner of her cage trying to get away from Willow who was the more dominant hamster.

The History of Hamsters

The History of each species of hamster and how they become domesticated, can be seen in this video below from Victoria Raechel.