The RSPCA Teamed up with Pets at Home back in 2012 as can be seen in this article in the vet times which says:

“Pets at Home chief executive Nick Wood said: “At Pets at Home, we are passionate about pets and their welfare is our top priority. This partnership will see us working with the RSPCA on several exciting projects during the next few years.

“We know the RSPCA’s messages don’t always reach every animal owner. Some people are simply not interested in campaigns and animal welfare information.

“Whether we are providing direct advice in stores or through RSPCA leaflets and booklets, this partnership could enable us to get our advice to them, and that could make a huge difference to an animal’s life.”

On the 28th April 2018 Mark Diner purchased Poppy from Pets at Home, he was given the leaflet “The Pets at Home and RSPCA Guide to Caring for your Syrian Hamster” which said they are “Working Together”. Sadly though, it didn’t contain the “Serious Risk” advice about fluffy bedding from The RSPCA website. Mark read that leaflet and relied on it’s advice and if it had contained the serious risk regarding fluffy bedding then that would have made a “huge difference to an animals life”.

Mark was unaware of the dangers of fluffy bedding and continued to buy the product which claimed it was “pet-safe”. Sadly, Poppy died from ingesting fluffy bedding, it was an exhausting death and she must have died in agony.

Mark alerted Pets at Home to his findings but they have continued to sell the bedding.  After alerting Pets at Home and The RSPCA to the leaflet omission, the fluffy bedding advice wasn’t added to the leaflet, all the same content remained but The RSPCA’s branding was removed from the leaflet. See images below. Since this version there is now another version of the leaflet, which was sent to Mark via his lawyers and available in stores. This version of the leaflet has brought back The RSPCA Branding but shows adjusted advice:

Some more time passed and in March 2021 Mark Diner allowed Pets at Home to view a Draft Press Release that discussed the leaflet issue. Pets at Home have now presented Mark with another version of the leaflet that has The RSPCA Branding and a lot of content is changed but it still omits the serious risk about fluffy bedding: What appears to be an effort to show some agreement with the advice the new leaflet says “Don’t use cotton wool or synthetic fibres”. However, the RSPCA website says “cotton wool or similar ‘fluffy’ bedding products”.

Rosewood Soft n Safe is made from Kapok it is a fluffy bedding, it is very similar to cotton wool and the label even says “full of fluffy cellulose fibres”.

Are They Trying to Pull The Wool Over Your Eyes?

It is hoped that Pets at Home will stop selling fluffy bedding and will put the same “serious risk” advice as The RSPCA regarding the dangers of all types of ‘fluffy’ bedding in their leaflet. We will of course update you if this happens.

If Pets at Home require further reassurance to use the same words as The RSPCA website and to include the term ‘fluffy bedding’ in their advice. They should take note that The Royal Veterinary College changed their advice since being presented with the kapok bedding ingestion evidence. The Old Hamster Care Leaflet just referred to cotton bedding, the advice in The New Hamster Care Leaflet from The RVC is now updated to include the wider term “fluffy bedding”.

The RSPCA also provide the “fluffy” bedding “serious risk” advice on the web pages for Rats, Gerbils and Mice. Similar to the Syrian Hamster leaflet, the leaflets for Dwarf Hamsters and Rats previously omitted the advice and then had The RSPCA branding removed, now similar to the Syrian hamster leaflet the new revisions have The RSPCA Branding but contain different advice to the RSPCA Website. It seems that The old Leaflet for Gerbils still remains unchanged.

(web.archive.org shows that the RSPCA advice was added to their website page at some point between October 18th 2014 and April 28th 2015)

The RSPCA say “Do not provide them with nesting materials that can separate into thin strands such as cotton wool or similar ‘fluffy’ bedding products. They pose a serious risk to the health and welfare of your pet.” 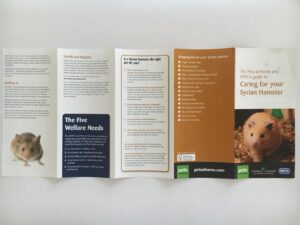 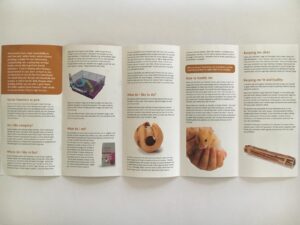 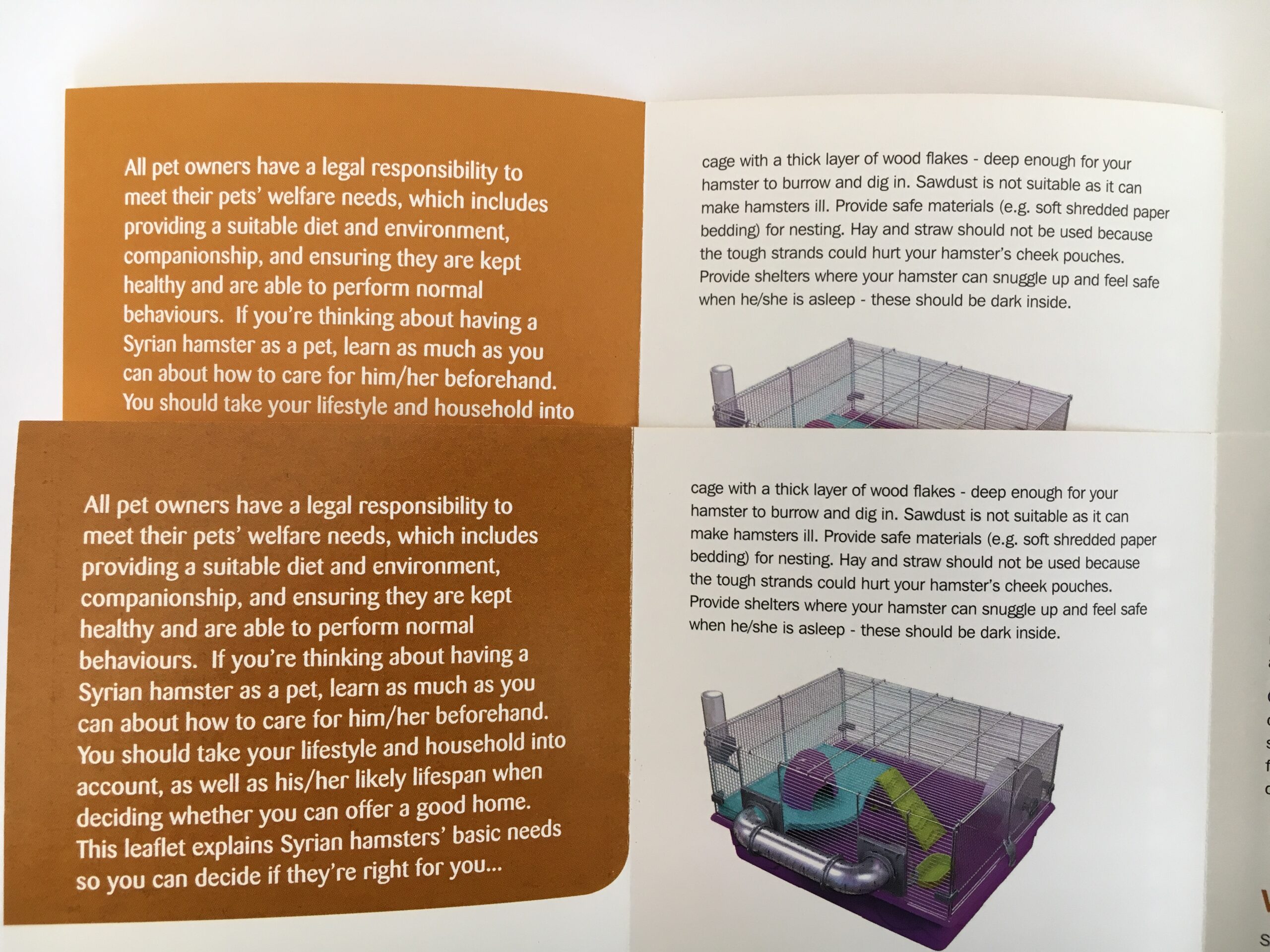 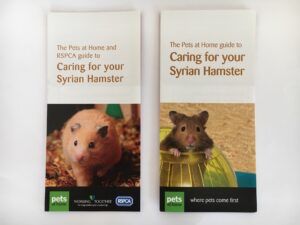 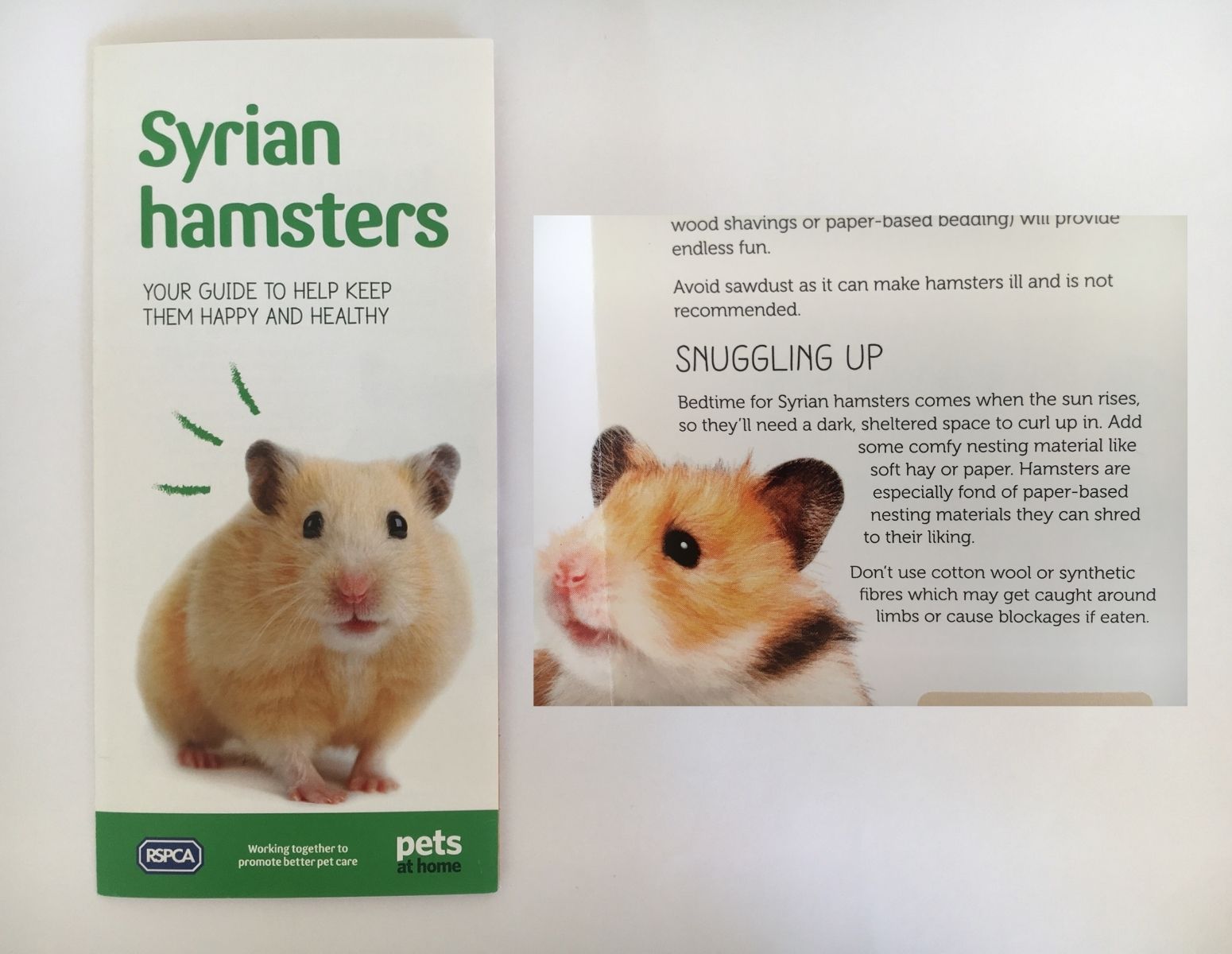 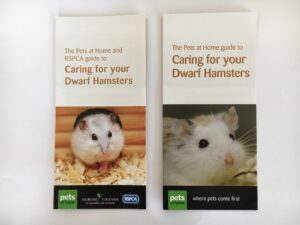 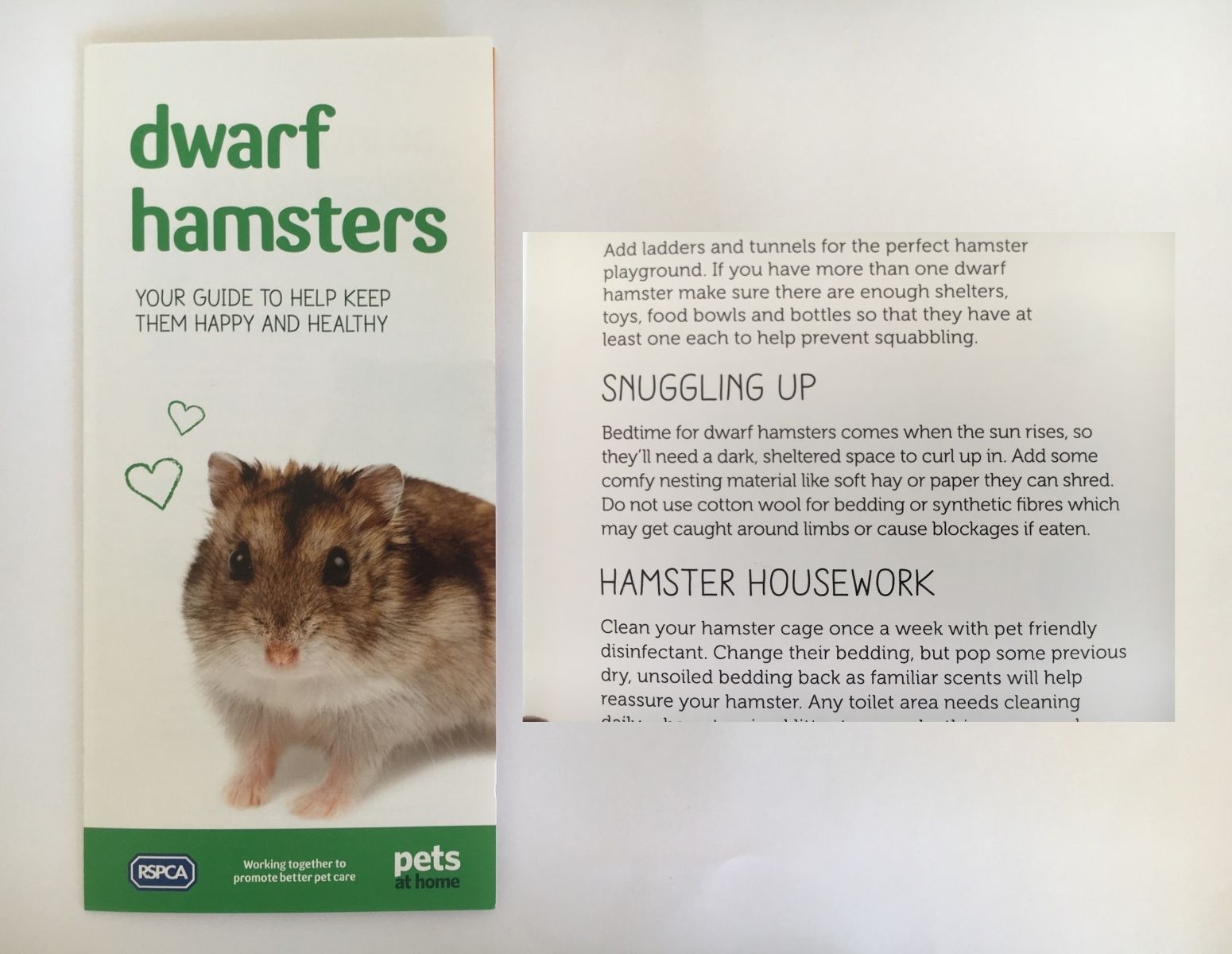 “Suitable nesting material. Rats like making their own nests and spend lots of time playing with nesting material. Don’t give them nesting materials that separate into thin strands, e.g. cotton wool or similar ‘fluffy’ bedding products. They pose a serious risk to their health and welfare, due to the possibility of entanglement or ingestion.” 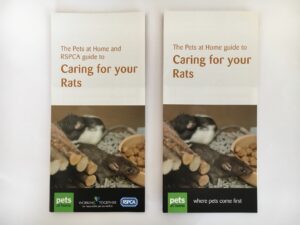 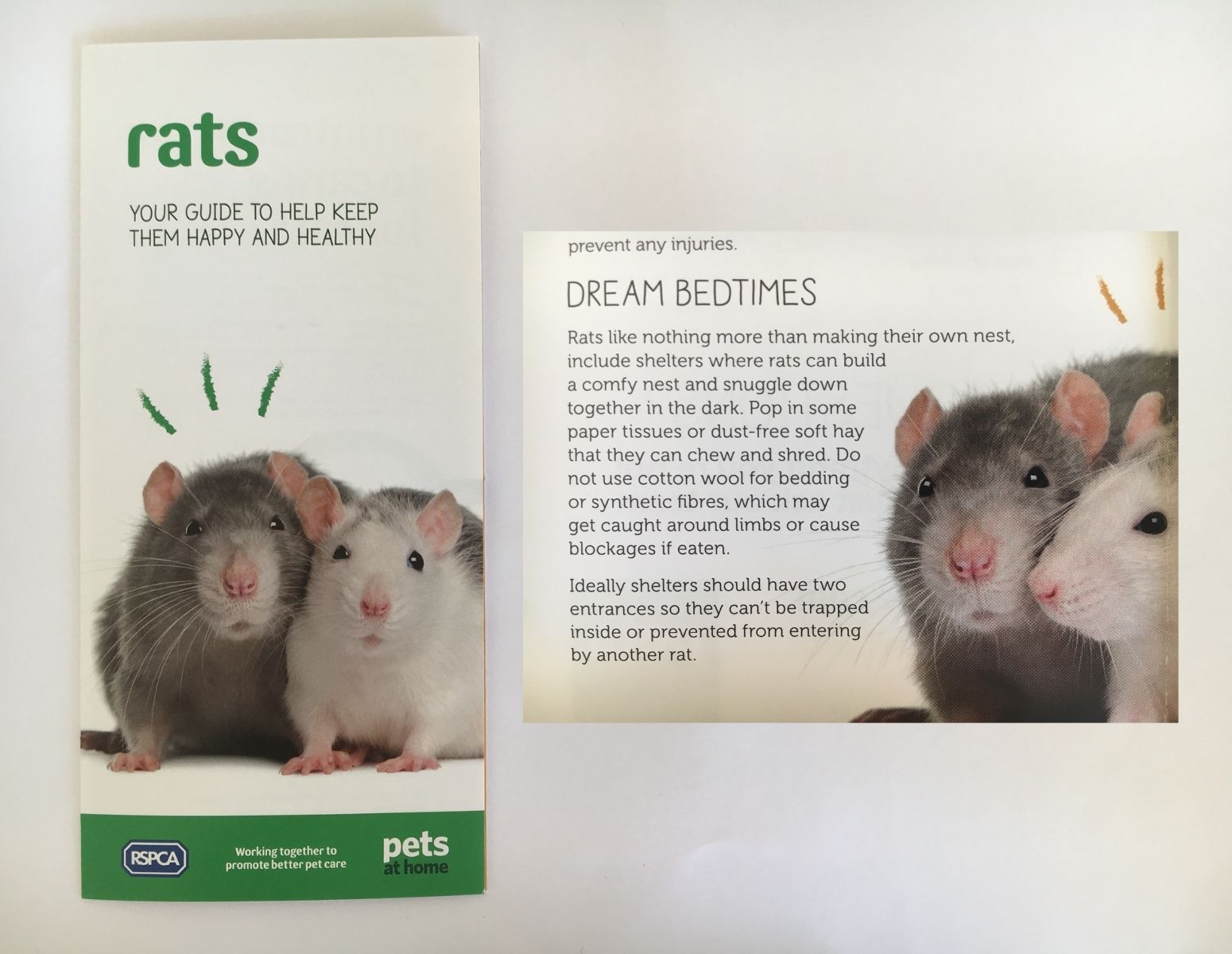 “Gerbils naturally build nests. Don’t give them nesting materials that separate into thin strands, e.g. cotton wool or similar ‘fluffy’ bedding products. They pose a serious risk to their health and welfare, due to the possibility of entanglement or ingestion.” 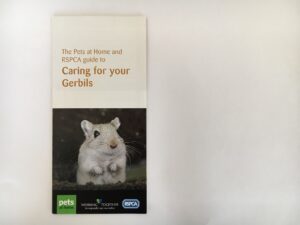 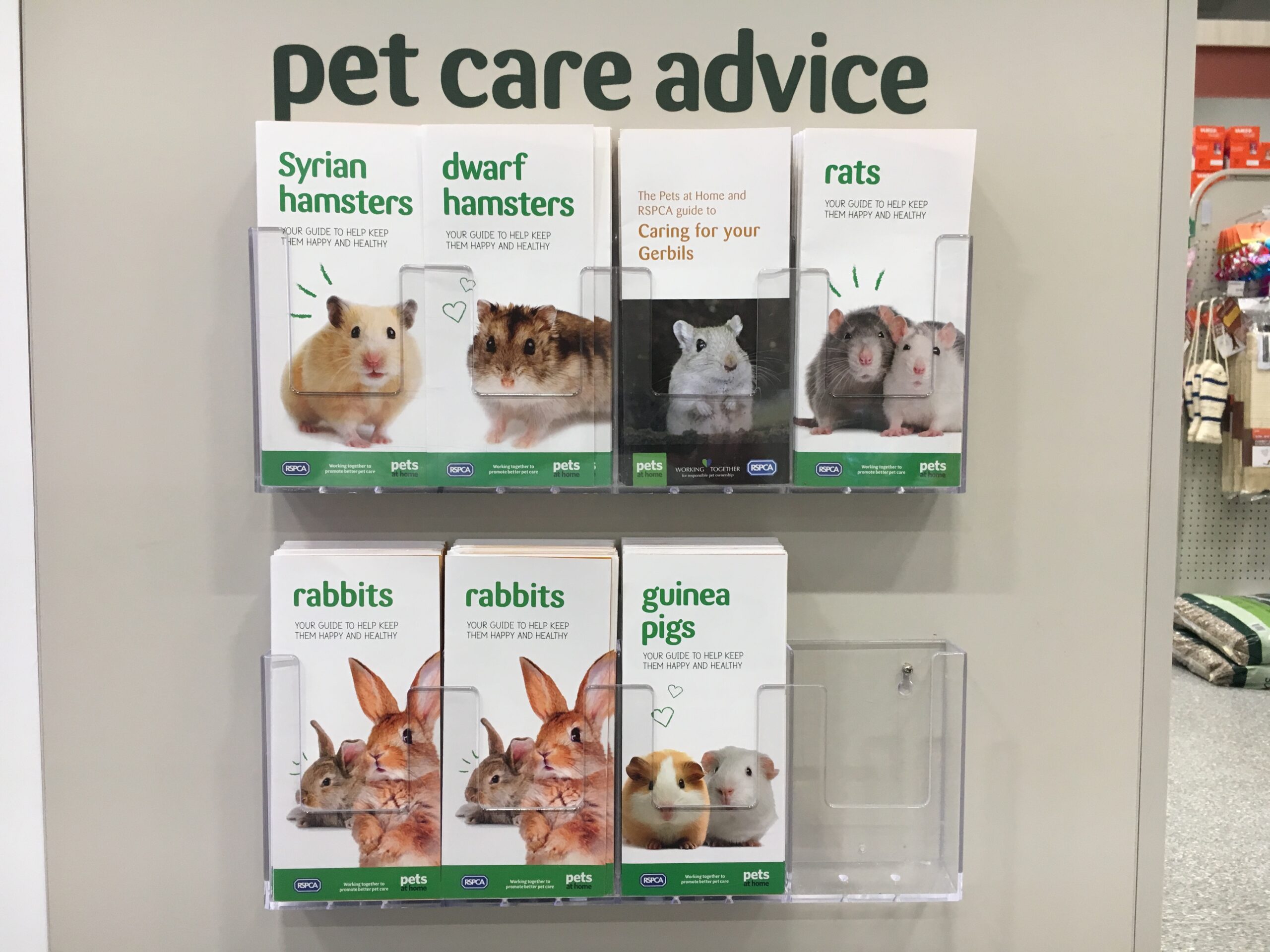 Thank you RSPCA for providing the advice on your website, the community greatly values your support for the welfare of hamsters.