Hamster bedding is one of the most important things in your hamster’s cage. To encourage natural behaviour, it is best to have plenty of bedding so that your hamster can make a burrow just like they would in the wild. Popular choices such as Carefresh and Kaytee have a tissue clump texture and are good type for holding up the structure of a burrow, your hamster will dig into them to make tunnels and chambers. Other textures can be mixed in to create a more natural environment such as Aspen which is safe to use as it doesn’t produce dust. There are brands of shredded tissue paper such as Fitch that also work fine and are good value for money. The picture below shows what a hamsters burrow looks like in the wild.

You Should Give Your Hamster a Section of Deep Bedding 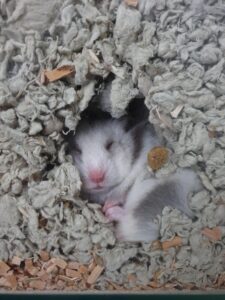 Research shows that giving your hamster the ability to burrow results in a far happier and less stressed hamster. Research on Bedding depth has shown “Hamsters kept with 10 cm deep bedding showed significantly more wire-gnawing and a higher running wheel activity than the hamsters in the other groups. In 80 cm deep bedding wire-gnawing was never observed.”

The RSPCA say: “In the wild hamsters are extremely good diggers and construct deep, dark, underground burrows so, if possible, give your hamster a thick layer of litter/bedding in which to dig and burrow”

It is recommended to have a section of at least 6 inches of bedding but 10 inches (25cm) is much more suitable as the hamster can make a deeper burrow like they would have done in the wild, it is also a way to make them feel safe and warm in their environment.

There are many different types of bedding out there to choose from, but not all hamster bedding is safe! Sometimes the packaging will say it is safe when it is not, even if it’s sold in a major store! So check out our list of unsafe bedding at the bottom half of this page.

Paper bedding is generally recommended as being the safest and best option. Popular types look like clumps of tissue and this type of bedding will hold up borrows and will keep the hamster warm. Paper bedding can come in different colours and this is a bonus to some hamster owners who like to make their cage themed. Paper will need to be fluffed up when it’s taken out of the packet and when the hamster walks on it, as it will start to compact together.

Here are some examples of paper bedding on the market:

Best value for money if you need large quantities of bedding

“You get a lot and it’s perfect for a detolf tank. It turns blue when it gets wet and that means you can see where to do a spot clean and remove odour” 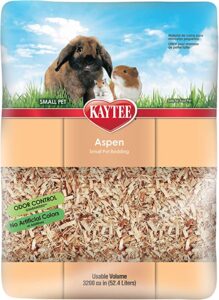 This type of bedding is a safe wooden based bedding, different to other types wood (i.e. Sawdust) Aspen doesn’t produce harmful dust that could cause respiratory problems and irritate a hamsters eyes. The hamster community recommend this as being the only type of wood based bedding that is safe to use. Aspen will give another texture to the enclosure, it’s not great at holding up burrows on its own so another bedding such as paper bedding would need to be added to the enclosure.

A great safe alternative to getting a similar texture to sawdust and doesn’t produce harmful dust. Similar to Aspen this isn’t good for burrowing on it’s own, so you will need to also add a Paper based bedding like Carefresh and that will hold up the structure of a tunnel and sleeping chamber.

Did you know you can DIY you own bedding?

Many people can be on a bit of a tight budget or cannot get hold of any bedding. There are a lot of nifty DIY bedding hacks on YouTube. For example, “ErinsAnimals” she makes her own paper bedding by shredding safe paper napkins.

You Can Use Soil to Add Another Texture

Soil adds another sensory experience and helps to create a natural environment like in the wild, it also encourages burrowing. (WARNING – Don’t just go outside and collect soil from your garden it may be contaminated with harmful bugs that you can’t see.) The soil should be shop bought, organic and not contain fertiliser or growth chemicals. It would be best to put the soil in its own section of the enclosure. Also, your hamster will get a bit dirty but that’s perfectly fine, it will dust off when the soil dries.

Sawdust contains very fine wood shavings and this makes it very dusty. For years Pet Shops have been saying this is suitable and it has been commonly used. However it is now known that the dust from Sawdust can lead to respiratory infections in small animals. This is now widely discussed for example research centre SATRA say “very fine particles in sawdust can cause respiratory problems for all animals, especially for small ones such as guinea pigs and hamsters”. If constantly breathing in the small dust particles isn’t bad enough it is also thought that fine dust can irritate a hamsters eyes.

(If you want a substrate with a wood texture for your enclosure, use Aspen or Hemp they are known to be safe as they don’t have the fine dust particles)

There is Plicatic acid and other harmful chemicals that are found in cedar trees. Plicatic acid protects the tree by killing cells but it is known to be toxic and an irritant for hamsters. Simarily, Pine trees contain Abietic acid which the OSHA has classified as a skin and respiratory irritant. For hamsters, Pine and Cedar can cause respiratory infections, allergic reactions and asthma. Our friends at Hamsters South Africa have made a page about the dangers of pine and cedar.

Scented Bedding can cause a respiratory infection and will irritate their nose and stress them out. Hamsters have very sensitive noses so scented bedding would be like if you were in a lift with someone constantly spraying strong smelling spray, it would start to irritate you and you will cough as it hits the back of your throat. Hamsters rely on their scent and adding a different scent will stress them out, this is why many hamster owners will put a bit of old bedding back into their cage, so that the hamster has his or her own smells and will feel safe and at home.

Fluffy Bedding for hamsters includes all types of bedding which are similar to cotton wool, cotton, kapok, bamboo fluff these may all be natural but that doesn’t mean they are safe. As well as an entanglement issue there is a respiratory issue with the material entering the lungs and an ingestion issue which can cause a fatal blockage. It is believed that the fluff gets stuck to the inside of a hamsters cheeks, and this is one way how it may become ingested. The Bluecross, Royal Veterinary College and The RSPCA say fluffy bedding is dangerous:

The RSPCA say “Don’t give hamsters nesting materials that separate into thin strands, e.g. cotton wool or similar ‘fluffy’ bedding products. They pose a serious risk to their health and welfare, due to the possibility of entanglement or ingestion.“

Corn cob bedding forms mould very easily and bacteria starts to form, it can also cause obesity and some hamsters are known to eat it. Corn cob bedding may also contain insect/parasite eggs which can also be harmful to a hamster.

When bedding has no information on what type it is, it is best to stay clear of it as it could be any of the types of the bedding listed above.